skip to main | skip to sidebar

The Hudson, The Acheron; The East River, The River Styx

Currently I'm reading Dante's Inferno. It's been difficult. I do 99% of all my reading on the train to and from work, and, considering all the distractions that the New York City subway beholds, a 13th-Century Italian Epic Poem about a journey into Hell is tough. However, there's something fitting about, blasting drone metal and diving into the outer-circles of the Netherworld while, in reality, am in small quarters with lunatics, crackheads, prostitutes, break-dancers, subway car preachers, and bums. Everyday is a wonderful mobile freakshow, riding on the rails of the subterranean serpent, slithering beneath the most populated 22-square-miles in the world. Humoring myself, I imagine that newfound modern political-correctness has lifted the segregation of the lustful and the glutinous, the violent and the fraudulent. We all live, stacked on top of one other, co-mingling at intimate distance, trying to pretend that one another doesn't exist.

Other news in google-searching "Dante's Inferno," I found there is video game coming out, loosely based on the story. Looks creepy and awesome. 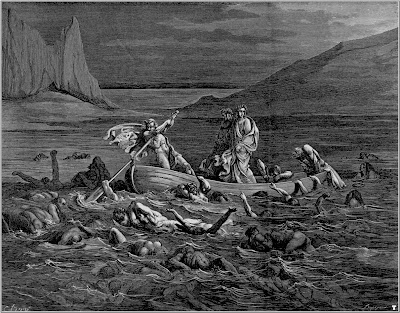 Posted by timziegler at 9:08 AM