skip to main | skip to sidebar

How To Make It In America 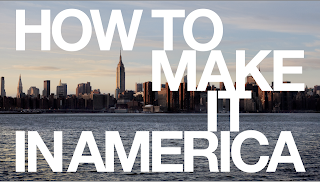 This is not an instructional guide by me. I can't help you out there. I can give some rough guidelines on how to fail in Finland, but that's where my expertise ends. No, this is regarding the HBO show. The press has deemed it Entourage, set in New York (it also happens to share the same producers). The show premiered on Sunday, February 14th. There has been one other episode since and the press has been pretty good.
I actually haven't seen any of the actual show. I intend to and I implore you, reader, to as well. I worked on the opening credit sequence (directed by duo Josh & Xander, edited by Max Koepke) doing color correction. I think everyone was happy with how it came out, and the opening has actually been highlighted in the press:
from Time Magazine:
"First thing you'll notice is the credits, which are the best thing about the show. That will sound like an insult. It is not; they are awesome credits. Not just because they look and sound great, but because, even by the standards of an HBO show, they really bring together the show's larger themes—grit, hunger, ambition, the multicultural whirl of New York and the culture-transcending pursuit of the almighty dollar—better even than the show itself does."
Posted by timziegler at 10:39 AM

Labels: colorist, hbo, how to make it in america